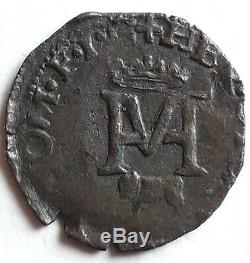 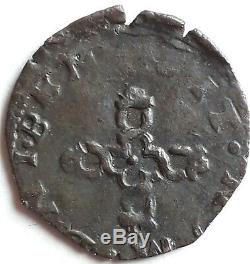 Bearn - farthing with no date. The cow of the Béarn and the monogram h m Henri of Navarre (later Henri IV) and Daisy Valois (Queen Margot). Royal Legend Sit Nomen Domini benedictvm, instead of the legend béarnaise dei gratia id qvod svm svm. This imitation of the Béarn farthing was manufactured in Frinco Italian workshop (small manor of the Italian Piedmont, Province of Asti, between Turin and alessandria). For the family Mazzetti counts. Monogram formed letter h and m, in a ring; below, the cow bearn. (Blessed be the name of the Lord). Billon 16 mm - 0.76 g. At right, one finds there the. E central pattern described in the avant-poey 3513 number, but the legend that is normally associated Henri. On the back, we find the cross twisted well-known farthings of Henri of Navarre, but it is not confined to bezants, and she does not have the. Traditional own caption to Béarn currencies: g. (Thanks to God, I am what I am). Is associated here with the legend Sit Nomen Domini benedictvm (blessed be the name of the Lord), which is as shown at the time of the currencies of France kings. Yet this legend sit nomen is mentioned by avant-poey (under number 3519 pa) for a farthing of Henri of Navarre, whose obverse shows - as here - the monogram formed by the two letters h and m d 'henri of Navarre (later King of France henri iV) and daisy Valois (Queen margot), but the legend of the obverse, unfortunately, it remained unreadable. Gustave Schlumberger, in its description of the Béarn currencies (105) mentions him as a farthing monogram h m which, as pa 3519, present the currency dni Bened the back, but his copy (described but not shown ) would in the ECU right channels of Navarra, instead of the cow bearn as here.

In fact, the origin and allocation of this money were explained by arnold morel-fatio in his article published in the journal of numismatics 1865. This is an imitation of the farthing of Béarn, which was manufactured in the Italian Frinco workshop.

269 ​​+ board xi No. The members of the Mazzetti noble family, lords of Frinco had obtained the Duke of Savoy Charles-Emmanuel the right to coin money. From 1581, they took the opportunity to make their small lordship imitations of French coins, Swiss and Italian.

This guilty industry lasted for twenty years, until Charles-Emmanuel, tired of complaints from neighbors lords terminates it by order of 20 February 1601. He then enter the material of the mint Frinco and sent to jail all the staff who worked there.

As for Hercules and julius caesar Mazzetti, Frinco lords, they were brought before the courts, and in 1611 they were eventually dispossessed of their stronghold on the orders of Emperor Rodolphe. The Frinco workshop during the period of its activity ranging from 1581 to 1601, imitated several French royal rooms (big and douzains for the most significant currencies, but also small imitated farthings farthings of the neighboring province of Dauphiné ) and papal coins of avignon, and farthings copied on the model of those who were struck in béarn and Navarre. We must believe that Hercules Mazzetti had to find its own interest, even in the case of currencies as small as farthings ... And this at the risk of counterfeiting seeking to pass them to other farthings circulating at the time!

Certainly this farthing honoring its Hercules abbreviated name (Mazzetti) but the first three letters of her look, obviously, to better impersonate the hen henri of navarre! For more information on the Italian imitations, see.

Bulletin of the French Society of Numismatics, in December 1976 p. This rare coin is shown in numismatics magazine 1865 board xi No. E cabinet of medals from the National Library of France, canned 3 identical copies. I am selling a part of my collection: remember to see my other items! The item \The seller is \This article can be shipped worldwide.