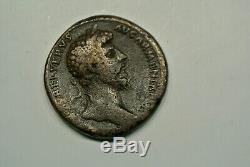 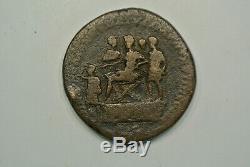 Lucius Verus dressed military left sitting on a folding seat placed on a platform with three officers, the right hand placed above sohaemus king darménie, which is left standing in front of the platform. Tribunicia potestas quartum imperator secundum consul secundum / rex armeniis datus (coated with the fourth power of the second imperial tribunitian cheer consul for the second time / king given larménie).

(7/03 / 161-02 / 169) Lucius Verus. Son of Aelius, Lucius Verus, was born in 130, was adopted along aurèle marc by Antonin at the express request of moribund hadrien. During the reign of his adoptive father, it remains in the shadows and not even received the title of Caesar.

After the death of Antoninus, his half-brother immediately sharing power with him, except the titles of \Lucius Verus led a brilliant campaign in Armenia between 163 and 165, and then against the Parthians. It lucille wife in 164. He died in February 169.