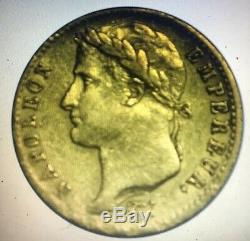 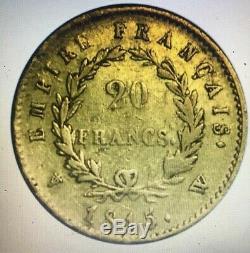 Laureate head of Napoleon left; signed droz f on the edge of the neck; below tr. In a crown formed of two branches of laurel.

On 6 April 1814, Napoleon ier sign his abdication. By the Treaty of Fontainebleau of 11 April, the Allies recognize the title of emperor with the sovereignty of the island of Elba and an income of two million.

They also agree to marie-louise sovereignty of the duchies of Parma, pleasure and guastalla. Napoleon farewell to his custody April 20 and arrived on the island of Elba May 4, 1814 where he will dedicate himself to the administration of his \Concerned about the coming conference and the presence of the Prince Imperial at Schönbrunn, helped by supporters, Napoleon arrives in Gulf-juan 1 March 1815 and up to Paris by road in the Alps.

He rallied the troops and March 21 arrived triumphantly to tile, this is the beginning of the hundred days. He promptly publish an additional act to the constitutions of the empire to revive the revolutionary ideal. Against him, the powers meeting to come from Congress form a new coalition. In June, Napoleon defeated the Prussians at Ligny on 16 but it definitely loses the waterloo 18.

Returning to Paris, he signed his second abdication on June 22 in favor of his son, recognized by the rooms as napoleon ii. This is the end of a period of one hundred days. Napoleon surrenders to English July 15 who decide to deport him on the island of saint helena where he arrived in October. He dictates his memoirs and the story of his campaigns before dying in 1821 at the age of fifty-two years.