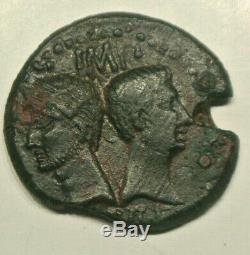 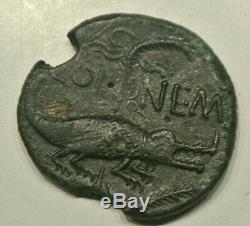 Currency in its untouched juice. Was one of the most important workshops. (Metal parts used to mint coins) were found at the time the excavations of the fountain.

Century, an exceptional discovery because if the locations of mints were generally known, during excavations (when they were possible) it is found that the foundations of the building, or at best, ovens remains, without tools, and even less with the corners for striking coins. At the time of august. To -27 / -28, Nîmes emits an original currency, known as the \Watch busts backed august, the divine son (divi f) implied Caesar. Shown with laurel wreath and grabbed his son and friend. Shown with the rostral crown, reserved for the winners of naval battles. A crocodile chained to a palm symbolizes the submission of Egypt. Note that the prize is an attribute Apollo, patron god octave, and a shrine to Apollo stood in front of the site of the battle of actium. Both sides commemorate the naval victory of actium. And grabbed on Antoine grounds. This currency often appears the name \But this is a misnomer because this currency is actually apparent as the Augustan reform 19.

Cash equivalent to twice the value of an ace. This explains why these currencies have often been cut into two equal paries, possibly four, to create and, as a result of a lack of cash, you see seedlings. Depeyrot estimated that the presence of two portraits on currency equivalent at that time to the indication of a value corresponding to two aces. The alloy used for minting is also not bronze (alloy of copper and tin) but brass (copper and zinc), alloy more valuable because of the greater scarcity of zinc compared to 'tin.

Often found that currency cut in two, half of the money was worth an ace. This currency will still end up in the reign of Tiberius 15-37 AD. C, but it is removed from circulation to 30 AD. C, the demonetised currencies then receiving a round contremarque, melt on the workpiece.

It will circulate throughout the empire for sixty years between about -27 to 30 AD. Check out my other items. Earn your purchases a single port to be set.