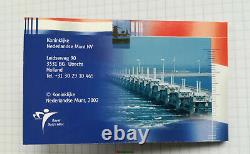 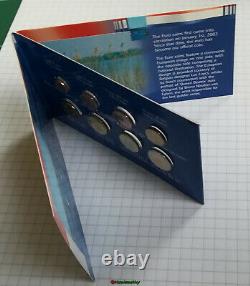 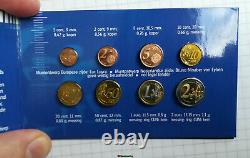 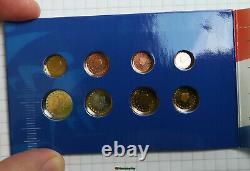 The complete series of 8 euro coins, strictly identical to the classic euro but in drunk quality and especially on the scale 1/2 (in the photo on the left a normal 1cent was placed next to see the difference)... But when the ecb (European Central Bank) found out, it immediately banned the sale of these euros. The royal currency of the Netherlands had planned to strike 2000 copies. When the ecb ordered the withdrawal of the cabinets from the market, some had already been sold, others that were recovered were destroyed. On the other hand nothing official has been published to my knowledge about the number of these boxes that has been recovered ...

There would be about 500 left on the market, but there is no evidence to confirm that. If the ecb stopped this sale, it is not on a mere whim but because this production did not conform to the rules of reproduction of euro which are very strict. [see below an extract of the breeding rules]. Next time the royal currency of the Netherlands will inquire more with the ecb before any extraordinary production....

because of this anecdote, this box is interesting and sought after by collectors. More info and photos here.

For more info contact me. For France: follow-up: free shipment in recommended: 6 euro. Payment by bank transfer or cheque.

For the rest of the world / for the world: registration letter - 12euro transfer bank (iban/bic code). The item \"Euro Netherlands mini bu 2002 very rare 8 pieces 1 cent to 2 euros\" is on sale since Monday, February 22, 2021. It is in the category of \"Euro-country-netherlands coins\".

The seller is \"numismativy\" and is located at kergrist. This item can be delivered anywhere in the world.