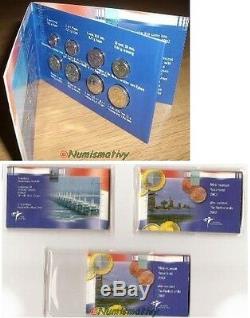 The complete set of 8 euro coins, strictly identical to the classical Euro but drinking quality and especially the 1/2 scale (pictured from left to normal 1cent was placed next to see the difference) ... but when the ecb (European Central bank) has informed it immediately banned the sale of the euro. The royal currency netherlands had planned to hit 2,000 copies. When the ecb to ordered the recall of cabinets, some had already been sold, others that were recovered were destroyed.

By cons nothing official has been published to my knowledge on the number of boxes that was recovered ... He would remain about 500 on the market, but nothing confirmed. If the ecb completely stop the sale, it's not on a whim but because production was not consistent with the rules of euro reproductions are very strict. [See below an extract of the reproduction rules]. The next time the Royal Mint from the Netherlands will inquire further with the ecb before any production out of the ordinary ....

because of this story, this box is interesting and sought after by collectors. More info and photos here. For more info contact me. For France: follow: free shipping by registered: 6 euro. Payment by bank transfer or check.

For the rest of the world / for the world: Registration letter = 12euro bank transfer (Iban / BIC code). The item \The seller is \This article can be shipped worldwide.