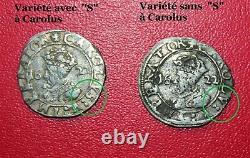 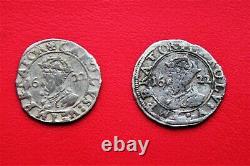 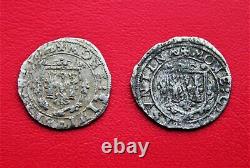 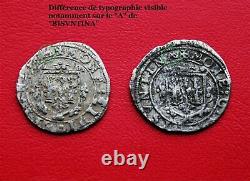 Rare: two varieties of carolus vintage 1622! In this announcement I propose 2 varieties of carolus type 5 vintage 1622 including one that is much rarer than the other with the inscription carolv:v: (without \"s\" therefore) instead of carolvs:v. From what I have observed, but this requires confirmation with a larger census, this variety without \"s\" would represent about 5% of the carolus struck in 1622 during the reign of Philip iv.

It also offers another small peculiarity, the typography of the legends is slightly different. This is quite obvious on the reverse especially the last \"a\" bisvntina which is quite different from one variety to another. I am not an expert in feudal currencies, but I had never heard of this second variety until before falling on it and yet it exists because if we observe the carolus vintage 1622 sold on the internet we will notice that from time to time, quite rarely certainly, we can come across this second variety without \"s\".

Personally, out of a hundred carolus, I found 2, including the one proposed in this ad. If you have any information about this variety, please send me a small message thanking you warmly in advance.

Two varieties of carolus with the inscription carolv:v: and carolvs:v. Imperial Free City of Besançon.

Feudal coins bearing the effigy of the emperor charles quint (carolus v). Common coins minted in 1622 under the reign of philippe iv.

It is in the category of \"feocaled french coins\". The seller is \"nicbec_22\" and is located in/in pau. This item can be delivered anywhere in the world.